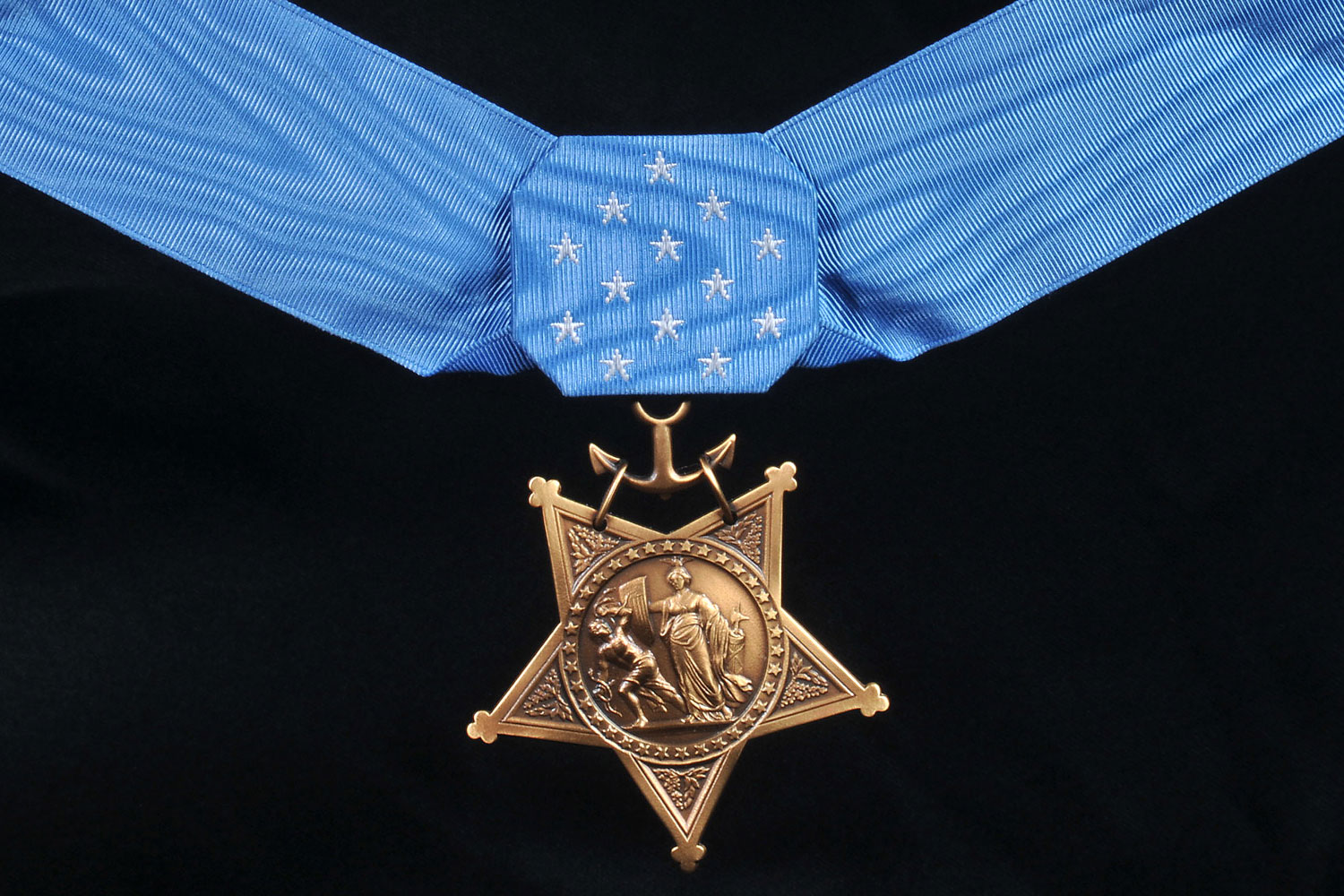 Since 1991, we have celebrated Medal of Honor Day On March 25.  On November 15, 1990 President George H.W. Bush signed Public Law 101-564 into place securing March 25th as the day in which we honor those who went above and beyond. When did the Medal of Honor originate?

March 25th was chosen as the official day to honor the 23 men who received the first official Medal of Honor on March 25, 1863. The first award was given to the men of the Great Locomotive Chase in April of 1862. During the chase, Union soldiers commandeered a train and did as much damage as possible to the railroad line that the Confederates relied upon.

The law signed by President Bush, reads in part “Whereas the Medal of Honor is the highest distinction that can be awarded by the president, in the name of Congress, to members of the armed forces who have distinguished themselves conspicuously by gallantry and intrepidity at the risk of their lives above and beyond the call of duty…Whereas public awareness of the importance of the Medal of Honor has declined in recent years; and Whereas the designation of National Medal of Honor Day will focus the efforts of national, State, and local organizations striving to foster public appreciation and recognition of Medal of Honor recipients.”

Some Interesting Facts
Since 1863, only one woman has ever won the award. A medical doctor named Mary Edwards Walker. Mary had volunteered with the Union Army at the outbreak of the Civil War. Having crossed enemy lines in order to treat civilians, Mary was captured by Confederate troops in the summer of 1864. She was later released and received the Medal of Honor from President Andrew Johnson on November 11, 1865.

Only one president has received the award, President Theodore Roosevelt. His son, Theodore Roosevelt Jr., earned one in World War II, making them the only father-son pair to win the prestigious award. President Roosevelt’s award was given posthumously by President Bill Clinton in 2001. The Medal was awarded to Roosevelt for his actions during the Spanish-American War with his regiment known as the Rough Riders.

The youngest recipient of the award in the 20th century was Jack Lucas, a marine who fought in Iwo Jima. He was only 17 when it was awarded.

The award is not named the Congressional Medal of Honor. Its official name is simply Medal of Honor. Many confuse the title in part because when being awarded the President says, “in the name of Congress.”

Submariners and the Medal of Honor
Since its creation, only a small number of Submariners have been awarded the prestigious medal. Their stories can be found on display in our permanent Medal of Honor Gallery here at the museum. The courageous men held within the gallery are:

Submarines have fascinated the world for centuries. The idea of underwater travel has been apart of most of record history. In 1776, the Turtle became the first submersible to perform an attack on another vessel. During the Civil War, the H.L Hunley sank the Housatonic. As diesel power grew, so did submarines. They became an essential part of the Navy, providing defense to the American coastlines and shipping lanes during WWI. During WWII, submarines sank one-third of the Imperial Navy. The 1950’s saw the birth of nuclear-powered submarines and a complete change to how the submarine force operated. The submarine force is also known as the silent service – the inner working of the force is a secret, classified to those who aren’t part of the crew. Artists over the years have tried to capture this secretive force, “drawn to its sleek yet hidden ship.” They try to capture the mystery of submarines in their work, giving us a glimpse under the water. Below you will find a collection of artworks from the NHHC Collection.

H L Hunley, a small hand-powered submarine, was built privately at Mobile, Alabama, in 1863, based on plans furnished by Horace Lawson Hunley, James R. McClintock and Baxter Watson. Her construction was sponsored by Mr. Hunley and superintended by Confederate officers W. A. Alexander and G. E. Dixon. Following trails in Mobile Bay, she was transported to Charleston, South Carolina, in August 1863 to serve in the defense of that port. On February 17, 1864, she was part of blockade duty off Charleston, approached the steam sloop of war USS HOUSATONIC and detonated a spar torpedo against her side. The Federal ship sank rapidly, becoming the first warship to be lost to a submarine attack. However, H L HUNLEY did not return from this mission, and was presumed lost with all hands. Her fate remained a mystery for over 131 years, until May 1995, when a search led by author Clive Cussler located her wreck. In August 2000, following extensive preliminary work, H L HUNLEY was raised and taken to a conservation facility at the former Charleston Naval Base.

After thirteen years of service beginning in 1924, USS BARRACUDA was decommissioned in 1937 and placed in the reserves. The submarine was recommissioned in 1940. The submarine is seen in a drydock at the Portsmouth Navy Yard before it left the Yard in March of 1941 to join Submarine Division 71 operating in the New England area. Established by the Federal Government in 1800, Portsmouth Naval Shipyard (PNSY) launched its first product, the 74-gun warship USS Washington, in 1815. During World War I, the PNSY workforce expanded to nearly 5,000. At this time, PNSY took on a new and important role—the construction of submarines—in addition to the overhaul and repair of surface vessels. World War II saw the civilian employment rolls swell to over 25,000. Over the course of World War II over 70 submarines were constructed at PNSY, with a record four submarines launched on one day. Following World War II, PNSY was the Navy’s center for submarine design and development. PNSY continued to build submarines until 1969, when the last submarine built in a public shipyard, the nuclear powered USS Sand Lance, was launched. Today the Shipyard continues the tradition of excellence and service to the Navy and the nation by supplying the U.S Navy’s submarine fleet with high quality, affordable, overhaul, refueling and modernization work.

All Hands Below, USS Dorado

Relieving the tension of hours below surface, crewmen on board a U.S. Navy submarine play a round of cards while a shipmate kibitzes from his bunk. While pondering his cards, each player also listens for the call to battle stations. In the foreground, the bulbous warheads of twin torpedoes seem to peer balefully in quest of targets.

On 17 January 1955 U.S.S. Nautilus (SSN-571) signaled the attainment of the long-anticipated goal of “underway with nuclear power.” Nautilus is called the first “true submarine” because it was capable of operating for long periods without frequent contact with the surface and air of the above world

Sailors gently lower 4000 pounds of torpedoes into the submarine Seacat (SS 399) in July 1960. In this era of Cold War tensions, Seacat helped keep watch of the United States southern coast and in the Caribbean. A torpedo, or “fish”, is being loaded into USS Seacat (SS-399) in preparation for an exercise off Naval Station, Key West. The men pull and strain, hold and release their lines so that the 4000 pound bomb is safely lowered below.

USS Michigan (SSBN-727) rests quietly at the US Naval Base at Holy Loch, Scotland in 1988, waiting to be replenished for sea.

These artists were able to provide a glimpse of the submarine force through a medium many might not expect.

To check out the rest of the collection visit the View From the Periscope exhibit page at https://www.history.navy.mil/our-collections/art/exhibits/communities/a-view-from-the-periscope.html

Do you have a favorite piece of submarine art?

Return of the Union Jack

On February 21, 2019, the Navy put out a press release announcing its decision to begin displaying the union jack instead of the first Navy jack aboard Navy ships. Beginning on June 4, the date of the Battle of Midway, all US Navy ships will return to flying the union jack. In its press releases Adm. John Richardson stated that “Make no mistake: we have entered a new era of competition. We must recommit to the core attributes that made us successful at Midway: integrity, accountability, initiative and toughness. For more than 240 years, the union jack, flying proudly from jackstaffs aboard U.S. Navy warships, has symbolized these strengths.”https://www.navy.mil/submit/display.asp?story_id=108663 He also comments that “The union jack is deeply connected to our heritage and our rise as a global nation with a global Navy.” Once the union jack is returned to flying, the navy will re-establish the custom in where the commissioned ship in active service the longest total period in active service having will display the first Navy jack until its decommissioning This is other than the USS Constitution. Beginning on June 4th, this would mean the USS Blue Ridge (LLC 19). But for those not in the Navy, what is the union jack and what is its history. Below you will find excerpts from the Naval History and Heritage Command on the topic. 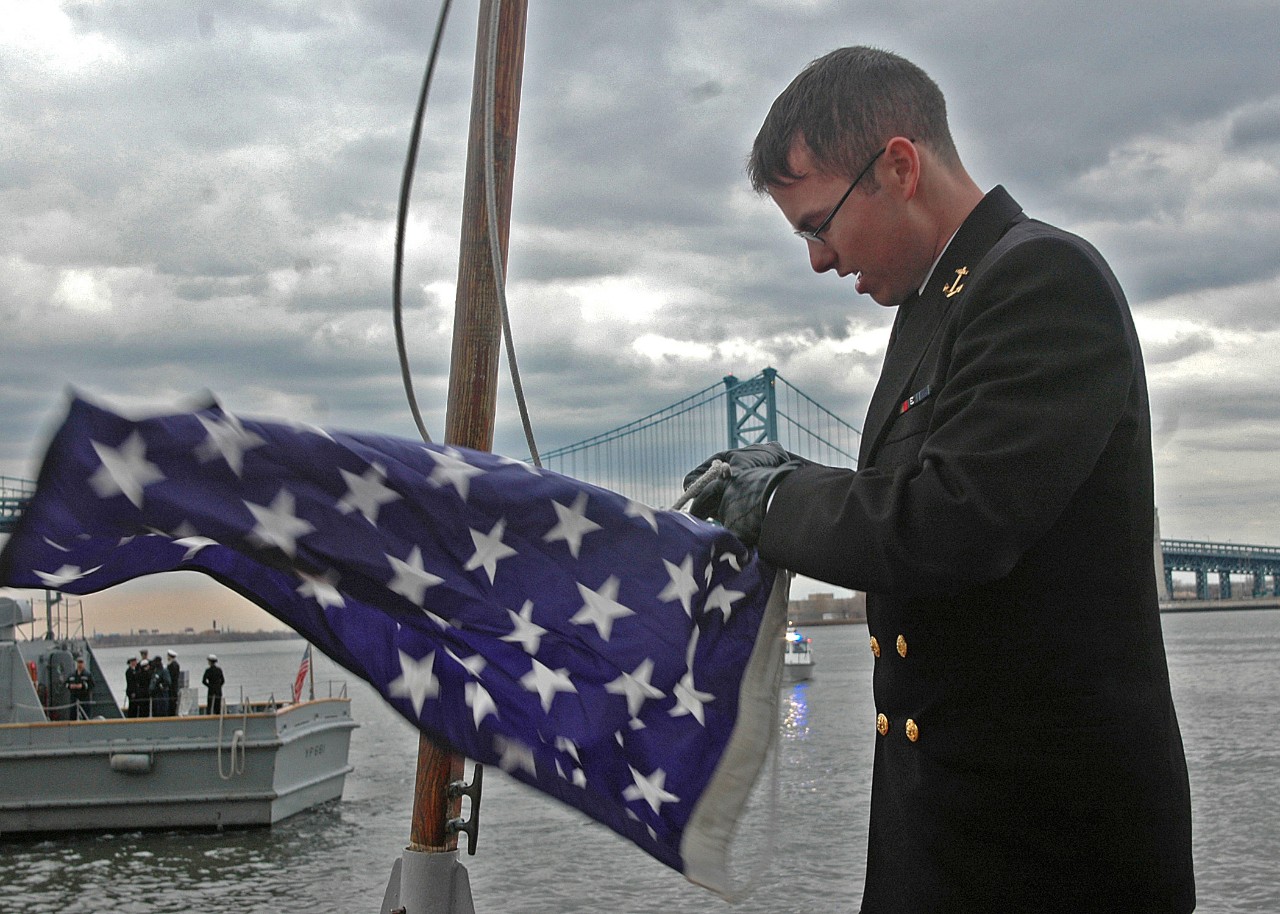 A jack is a flag corresponding in appearance to the union or canton of the national ensign. In the United States Navy, it is a blue flag containing a star for each state. For countries whose colors have no canton, the jack is simply a small national ensign. On a sailing vessel, the jack is hoisted at the jack-staff shipped at the bowsprit cap when at anchor or in port.
The United States Navy originated as the Continental Navy, established early in the American Revolution by the Continental Congress by a resolution of 13 October 1775. There is a widespread belief that ships of the Continental Navy flew a jack consisting of alternating red and white stripes, having the image of a rattlesnake stretched out across it, with the motto “Don’t Tread on Me.” That belief, however, rests on no firm base of historical evidence.
It is well documented that the rattlesnake and the motto “Don’t Tread on Me” were used together on several flags during the War of Independence. The only question in doubt is whether the Continental Navy actually used a red and white striped flag with a rattlesnake and the motto “Don’t Tread on Me” as its jack. The evidence is inconclusive. There is reason to believe that the Continental Navy jack was simply a red and white striped flag with no other adornment.